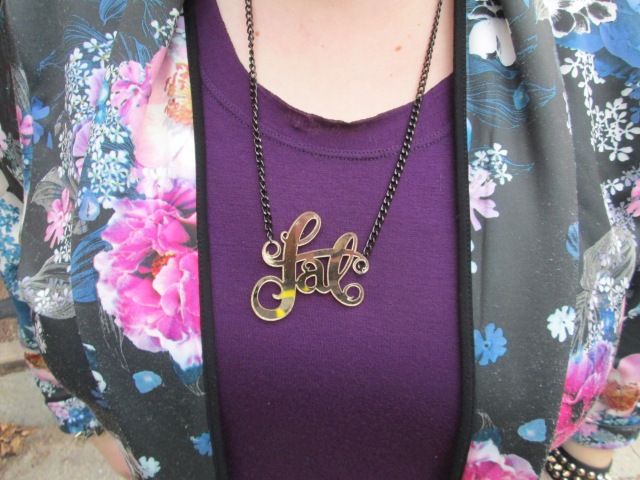 (Note: in this piece, I refer to the movement in question mainly as fat acceptance, or FA, since that’s how I first came to know it. Other people may prefer to call it size acceptance, fat justice, fat activism, etc. Like most movements, it’s more a series of overlapping movements than one cohesive community, which I think is a good thing.)

I recently read a piece on XOJane titled, Why I’m Over The Size Acceptance Movement or Hey, SA, What Have You Done For Me Lately? Like many XOJane pieces, it’s scattered and confusingly written (and could have benefited greatly from the hand of a skilled editor). It’s especially confusing that the author, Cary Webb, calls for more 201-level discussions within the fat acceptance movement, yet doesn’t seem to grasp some of the 101-level basics of the movement: like the fact that discussions about considering weight loss surgery support fat-negative narratives, and therefore don’t belong in FA spaces. People who want to talk about weight loss can go literally anywhere else on the internet–or in the world–and have those discussions supported, but those of us who want a break from hearing about it have only a few spaces where we can do so. It’s the height of entitlement to demand that such spaces include weight loss talk.

Webb brings up important issues like racism, healthism, poverty, and ableism in the same sentence as wanting to be allowed to say that “there is such a thing as clothes that fat people shouldn’t wear”–umm, what? Policing what other fat people wear is neither FA 201 nor 101–it’s just more of the same oppressive shit we get from the rest of the world. And like weight loss talk, it has no place in our movement.

Even though I have some major issues with the piece, I’m glad that it has sparked discussion across multiple FA spaces about the state of the movement. Here are a few of my thoughts, in no particular order: END_OF_DOCUMENT_TOKEN_TO_BE_REPLACED