On Saturday, I went out with my brother and Steve for a dinner at Max Brenner, an awesome chocolate-themed restaurant. On the way there, we stopped at the Fairmont Copley Plaza to visit Carly the adorable pup and take a few outfit pictures. I wish I could take outfit pictures in a fancy hotel every day…

Look at that adorable puppy face! Don’t you just want to boop her nose?

Problems I have regularly: do I want to dress like a ’90s club kid, or like a witchy woodland queen? This time, the witch won out–but only after I had tried on approximately a million outfits and left an enormous pile of clothing in my wake. 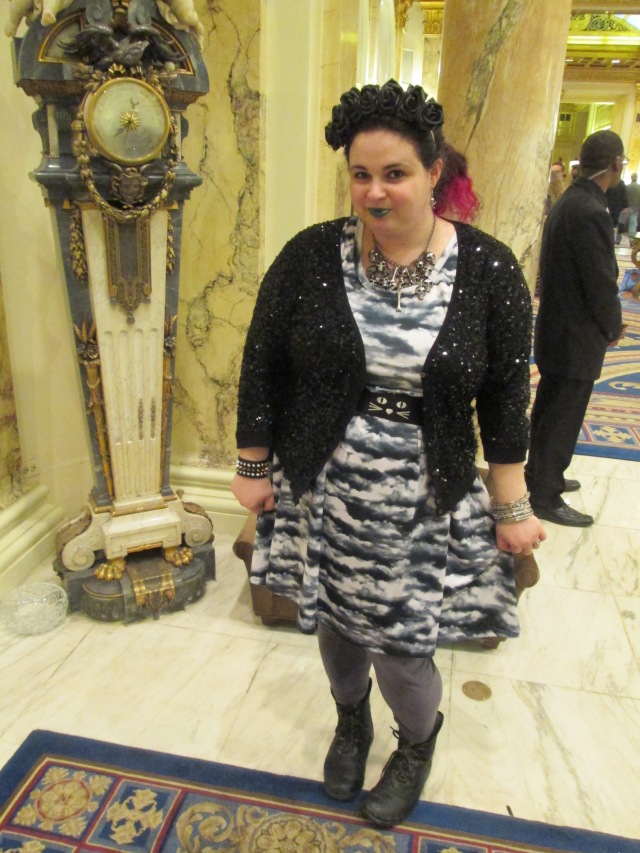 The lighting was dark at the restaurant, so my pictures didn’t turn out that well, but the food was delicious. My brother and I split the mac n’ cheese (which is one of the best I’ve had in Boston–highly recommended) and a chicken, goat cheese, and arugula salad on a savory waffle. For dessert, we split “pasta” made of chocolate crepe ribbons, drizzled with chocolate ganache, with sides including a block of white chocolate “cheese” to grate on top; and dark chocolate fondue with various things to dip including strawberries, marshmallows (and a small flame to roast them over), brownie bites, and tempura banana pieces. Below are the two desserts, which were much prettier in person!

6 thoughts on “Fatshion February, day 28: The witch in the enchanted palace”