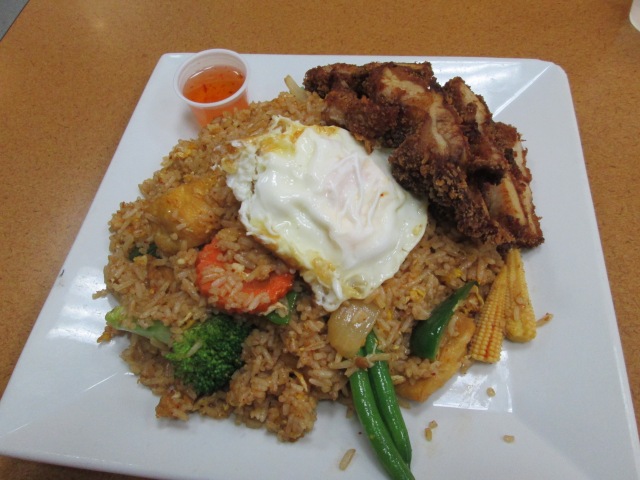 I realized I haven’t posted any food pictures in a while. So here is some delicious Indonesian fried rice.

#BlackLivesMatter
-Absolutely gut-wrenching: Eric Garner’s daughter staged a “die-in” at the same spot where her father was killed.
–Eric Garner said “I can’t breathe” 11 times–now activists are making 11 demands in his name.
–The civil rights movement came out of a moment like this one.
-Must-read profiles of DeRay McKesson, one of the organizers behind the Ferguson protests, and Frankie, a protester.
–Today in solidarity: incredible women and girls of Ferguson.
–Police violence happens to black women, too.
–Whose lives matter? Trans women of color and police violence.
-“We live in a country full of racism, but no racists; rape, but no rapists. And the common denominator is power.”
–Black poverty is state violence, too: why struggles for criminal justice and living wage are uniting.
-“I’ve been attending and observing protests for thirty years, and I’ve never seen anything quite like what I’ve experienced in New York City over the last week.”
-These pictures document the unprecedented scale of the protests. You can also see powerful pictures from a few of Boston’s actions here, here, here, here, and here.
-A list of concrete ways that white people can act accountably within the movement. 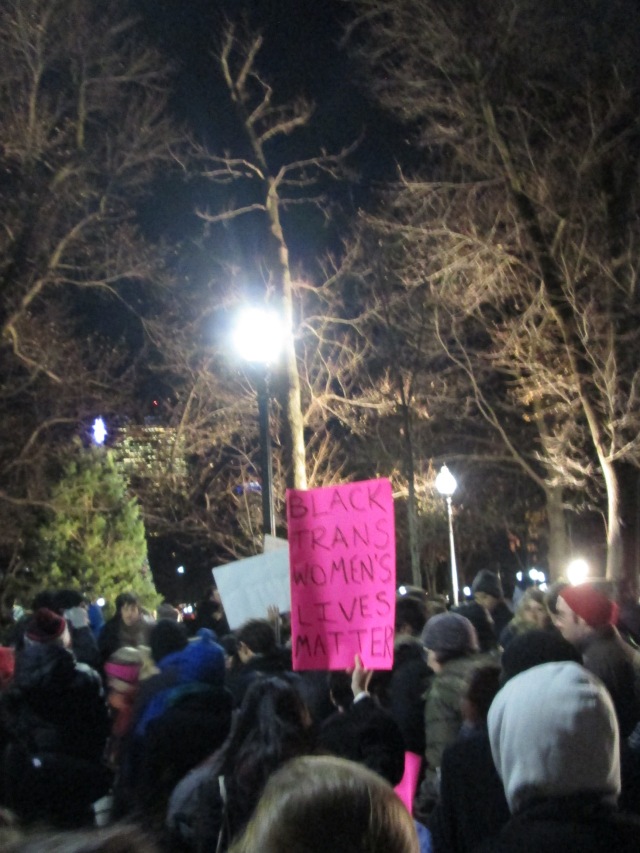 An important sign I saw at a recent protest.

–For those of us who cannot physically or emotionally participate in any actions…
–8 ways to support protests against the criminal punishment system, if you can’t get out in the street.
–My son is black and austistic, and I’m scared of what the police will do to him.
–We don’t just need nicer cops, we need fewer cops. In related news, an investigation of five cities finds that body cameras usually help the police, not the people.
-Police officers’ jobs are stressful? There’s an easy solution: give them less work. (This piece is a few months old, but as relevant as ever.)
-Police unions are the bad kind of unionism.
-If you still think that maybe most cops are genuinely trying to keep their communities safe, keep in mind that they usually provoke protesters, not the other way around–and that the undercover cop who pulled a gun on protesters in Berkeley when they outed him is just the latest in a long history of undercover cops infiltrating movements that threaten the power structures they protect.
–America’s grim identity crisis: what Ferguson and Eric Garner tell us about the history we don’t teach.
–Why #BlackLivesMatter should transform the climate debate.
–Rabbis recite Kaddish, Jewish mourning prayer, for Eric Garner, and are later arrested in NYC protest. ❤
–I’m watching police brutality and injustice cause my friends to alter their everyday behavior out of fear.
–Ferguson, One Direction, Tumblr, and why you need to pay attention to teenage girls.

Fa(t)shion
–Costuming while fat and uncrafty. I can relate to s.e.’s frustration so much–I just want to be able to walk into a thrift store around Halloween and buy something costumey for cheap.
–I’m a cis man who likes to shop in the women’s section: no, this isn’t a drag race.
–These amazing androgynous looks from fashion bloggers laugh at the notion of the gender binary.
-These pictures from the fashion exhibit at Hello Kitty Con are everything.

Fat Acceptance
–5 reasons why I won’t fat-shame my daughter and don’t care if she gets fat.
-As a response to some douchecanoe’s proposed Tell A Friend They’re Fat Day, and Slink Magazine’s well-intentioned but misguided idea to replace the word “fat” with “fab,” Bethany has declared January 7th to be Tell A Fat Friend They’re Fab Day.
-If you want to organize a local fat, queer event, you can apply for a grant from NOLOSE.
–The danger of being the fattest person alive.
–How people see you when you’re big and black.

Everything Else
-This made me literally laugh out loud: Why Amelia Bedelia is the most terrifying character ever.
–Stop mocking gluten-free faddists–they’re just trying to feel better.
-If you’ve been wondering why many of the smartest people on Twitter suddenly disappeared, they’ve gone on strike due to widespread plagiarism and harassment, from both within and outside of their movements.  One of the women, @bad_dominicana, writes more about her experiences and thoughts here.
-A few awesome gift guides: Sweet Leigh’s indie gift guide, Bitch Magazine’s gift guide for social justice warriors, and Margot Meanie’s gift guide for stargazers.
–Why I don’t want to hear both sides of rape cases.
–“What if every single time we felt obliged to say ‘yes, women sometimes lie about rape’ we added ‘and rapists almost always lie about rape’?”
–‘Hurry up and heal’: pain, productivity, and the inadequacy of ‘victim vs. survivor.’
–Rolling Stone threw a rape victim to the misogynist horde.
–Move over, HP Lovecraft, fantasy writers of color are coming through. Related: 19 science fiction and fantasy novels by women of color you must read. And if you can, help the Midwest’s only steampunk bookstore–which is also the only black-owned steampunk bookstore in the US–stay afloat!
-The idea of solarpunk–which is similar to steampunk, but based on solar power and with an Art Nouveau aesthetic–resonates with me so much.
–You’ll never think about drug addiction the same way again after reading this comic.
-Good news, although the fight isn’t over: Rasmea Odeh will be released pending sentencing.
–Replace fake Israeli-Palestinian co-existence photos with real images of co-existence.
–Senate torture report finds the CIA was less effective and more brutal than anyone knew. Everything about the torture report has been so horrific–and yet so unsurprising–that I haven’t been able to stomach reading much about it, especially while paying close attention to police violence and racism. But I do feel that it is important to stand up as a US citizen and say, “Fuck you, government. Torture is not ok, has never been ok, will never be ok. Fucking stop it already.”