A few weeks ago, BUST magazine held a craft fair here in Boston. I went with a few friends, and wore my Oblivion dress from Domino Dollhouse, because I’m in love with it and can’t stop wearing it–in fact, I am wearing it right now as I write this post.

On our way to the craft fair, we came across a bar called The Gallows, which was the perfect background for a picture.

I am obsessed with this necklace, you guys. It has so many skulls. And I got so many compliments on it, too. I love wearing pieces of jewelry that are so stunning that they command the attention of everyone I walk past.

My friend Maggie, who is always fabulously dressed, wore an outfit that matched mine perfectly. I love when my friends and I match without trying!

And Nikki had the cutest panda earwarmers!

On the way to the craft fair and while walking around a bit afterwards, we met so many adorable dogs. This Bernese Mountain dog, a sweet fluffball named Gus, was my favorite. He was so excited to make new friends. 😀

Maggie looking cute outside the fair! I love that her neon rhinestone necklace brings a pop of color to an otherwise dark, mostly-neutral outfit. 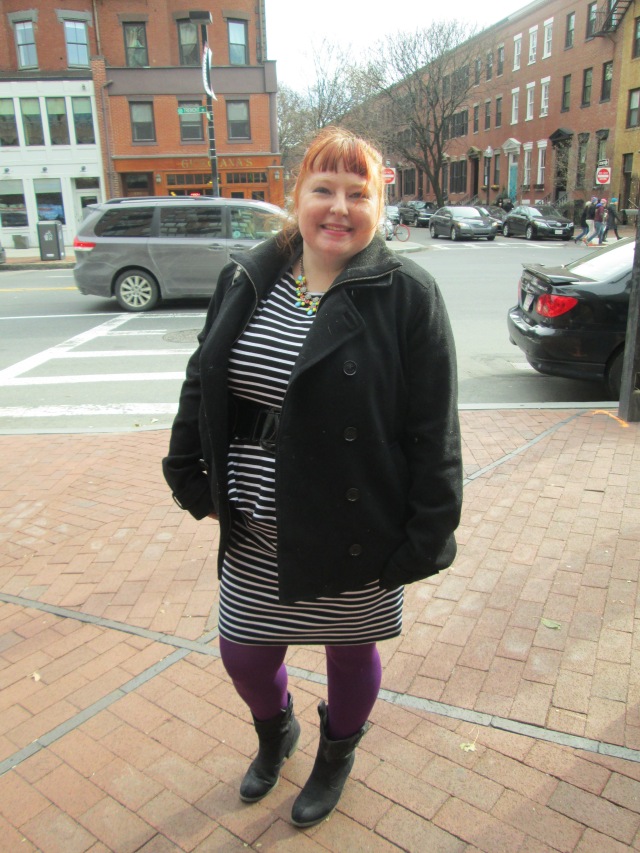 After a bit of walking around, taking pictures, and checking out a thrift store (and hoping the line would die down, although it never did), we meandered into the craft fair. I made a beeline for the first booth I spotted, which turned out to be my favorite of the entire fair: I’m Your Present.

And even a few festive Christmas-themed items. How cute are those penguin earrings?

I ended up buying a bunch of things from this booth, and pretty much nothing else.

Near the ugly sweater photo booth (aka a pile of ugly holiday sweaters on a table near a winter-y backdrop), we ran into my friends and fellow fab fatties Jeannette and Laura. They were both wearing vibrant floral dresses, which I think they said were from ASOS Curve: 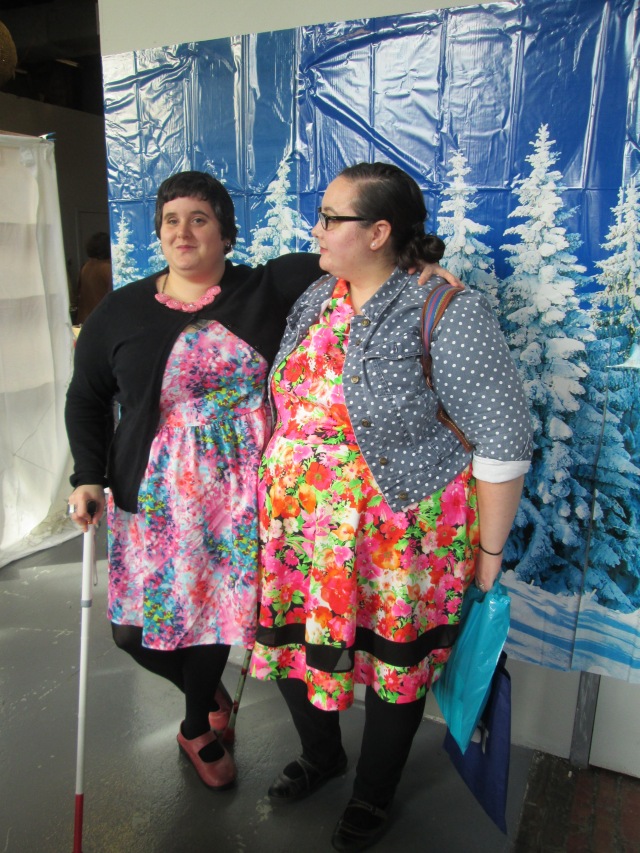 Aren’t they adorable? 🙂 I love how well their outfits go together!

There was also a cat café, which was one of the main reasons I decided to go to the fair–but it was actually pretty underwhelming. We waited in a long line to get in, and then had to move quickly because there were only a few kitties and a million people who wanted to pet them. 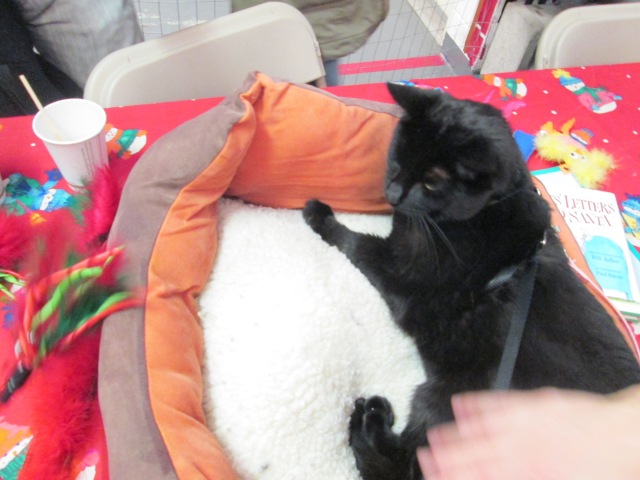 They were cute, but I got less kitty-snuggles than I would get from going to the apartments of any of my cat-owning friends. So it was cool for the novelty value, but not really worth it.

Another booth I really liked was Pretty Snake, which sold clothing in all sorts of awesome prints. This puppy-print skirt was my favorite. 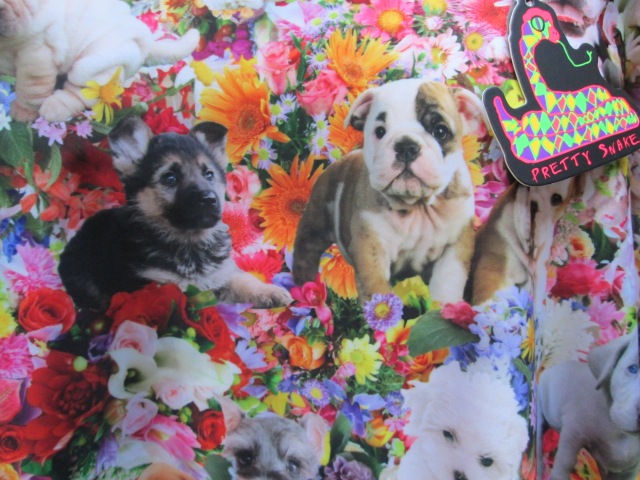 All of the items were straight-sized, but the owner mentioned that he could make a custom order in my size.

I appreciate that he does custom orders, and that he is upfront about advertising his willingness to do so. But it still bothers me that this company–like most small clothing companies I’ve seen at craft fairs–thinks of their default consumers as thin people, and of fat people as an afterthought. Why should I have to request a special order, when thin people can just walk up to the booth, try on whatever they like, and have the option of buying something on the spot? This is exactly what Ragen talks about in her post, An Inconvenient Fatty, and it’s something I find so frustrating. 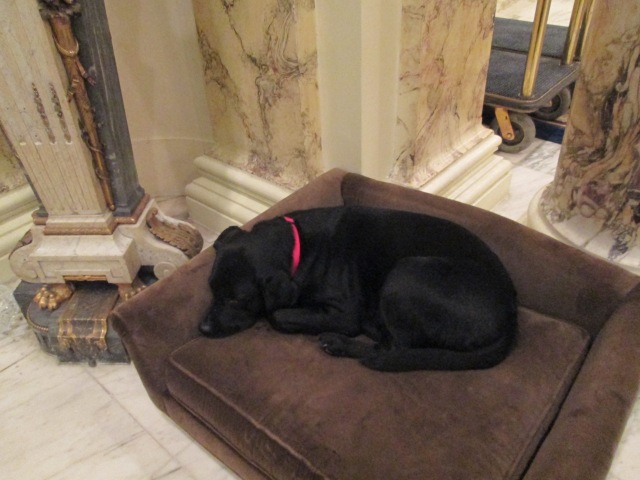 Continuing the day’s cute animal theme: after we left the craft fair and my friends went home, I dropped by the Fairmont Copley Plaza to see Carly Copley, one of their two “canine ambassadors.” Yes, there are two adorable black labs who live in a hotel lobby, and you can walk right in and pet them!

Later in the evening, I met up with Steve, my brother, and our friend Shana for dinner in Chinatown. I didn’t get any pictures of our food, but it was delicious. We split a bunch of things including soup dumplings, rice sticks with chicken and veggies, and duck buns. This was the first time I had tried soup dumplings, and I am a bit obsessed with them now. SO DELICIOUS.

Afterwards, we went to the Faneuil Hall Christmas tree lighting, and then rode my favorite carousel.

Overall, it was a bit of an exhausting day–especially since the craft fair was crowded and very sensory overload-y, which really wore me out–but also a fun one. And any day that involves petting multiple big fluffy dogs is great! 😉

7 thoughts on “OOTD: The Oblivion dress part 2, and the BUST Craftacular”